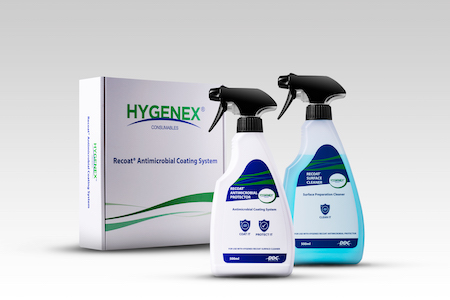 DDC Dolphin has launched the Hygenex Recoat antimicrobial coating system that is proven to be effective against bacteria and viruses including MRSA, E.coli, and Sars-CoV-2/Covid-19.

The easy to use spray-on coating, which protects surfaces for up to six months in a single application,

works by creating an infection-killing barrier and can be used on a wide range of substrates including stainless steel, aluminium, copper, zinc, chrome, most plastics, glass, ceramics, wood, stickers and foil and can be applied to a variety of touchpoints including door handles and touch screens.

The result is reliable inhibition and elimination of bacteria and viruses, an important consideration for all areas where hygiene is of the utmost importance.

Infections allowed to remain on surfaces spread alarmingly quickly. Tests by researchers at Imperial College, London showed how viral DNA on a hospital bed rail was spread to 18 other surfaces in ten hours. These surfaces included door handles, chairs in a waiting room, children’s toys and books in a play area.

This is a serious risk because droplet-borne viruses – such as Sars-CoV-2/Covid-19 – can remain infectious on plastic or stainless steel for up to three days. Some bacteria – such as E. coli and MRSA – can survive there for several months.

“A single cough can produce thousands of infectious droplets so regular cleaning and disinfecting of surfaces is critical. However, there is always the fear that an area may not cleaned thoroughly enough – or missed altogether,” said DDC Dolphin marketing director Zoe Allen.

“But the new Hygenex Recoat antimicrobial coating system provides vital extra protection and reassurance because it continues to kill infections for up to six months between applications,” she added.

Hygenex Recoat uses silver ions as an active ingredient to help kill infectious viruses and bacteria. Silver has been used to control infections for thousands of years.

Silver’s popularity waned with the advent of antibiotics, yet antibiotics do not work on viruses – and bacteria are becoming increasingly resistant to them too. So, science is turning once again to silver.

DDC Dolphin has worked closely with the Dutch company Recoat BV, which provides the technology behind this revolutionary antimicrobial agent. Recoat has spent the past two years developing this coating technology, which can now play an important role in the fight against Covid-19.

Intastop Ltd has been leading the way in the specialist fields of anti-ligature products and door and wall protection for over 20 years. This pedigree, combined with the company’s commitment to new product development and leading edge innovation, ensures Intastop remains a leading manufacturer and supplier to the healthcare, public and leisure...